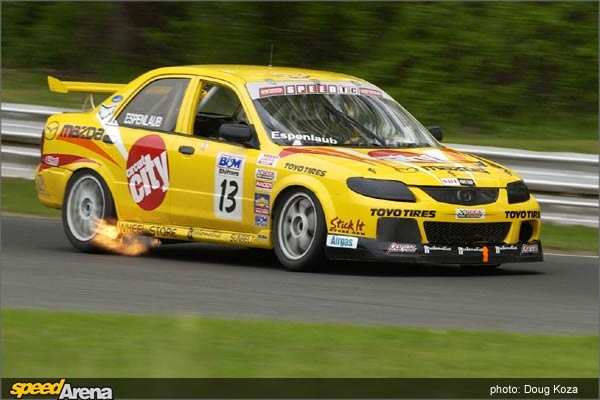 The Mazda Proteges shown here were custom built from the ground up by AWR for the SpeedVision World Challenge series. AWR later built a Mazda6 for Protomotive to compete in the newly named SPEED World Challenge Series. See the Mazda6 World Challenge Gallery. Also take a look at the build gallery for Gary Gist’s World challenge Protege.

The yellow and white car was driven by Charles Espenlaub. This car was actually the oldest Protege in the World Challenge Touring Car class.

The car was later painted the bright yellow color with the bold Circuit City graphics on it. The suspensions are custom designed by AWR. The roll cages were built by Carl Azevedo who built many the cages for AWR. The dash and pedal assemblies as well as the steering setup were fabricated by AWR. The big brakes are Wilwood products.