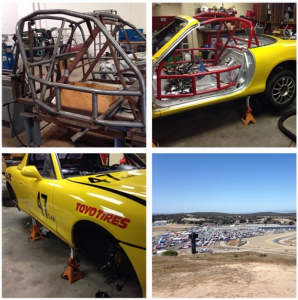 Thank you Joe Jordan for posting this picture! It’s been a long month! From bare chassis to TeenMazdaChallenge challenge victory in its 3rd session on track. Very proud of all of the family that helped build this car. @AWRRACING @jimjordan,@jahnajordan,@joeyjordan. XFACTOR ENGINES made it easier than it should have been. One more to go this weekend! Still lots of work and changes to be made

Check out our new products installation guides for when you need help installing your parts! 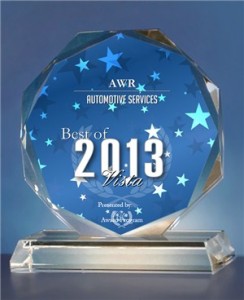 VISTA May 15, 2013 — AWR has been selected for the 2013 Best of Vista Award in the Automotive Services category by the Vista Award Program.

The Vista Award Program is an annual awards program honoring the achievements and accomplishments of local businesses throughout the Vista area. Recognition is given to those companies that have shown the ability to use their best practices and implemented programs to generate competitive advantages and long-term value. 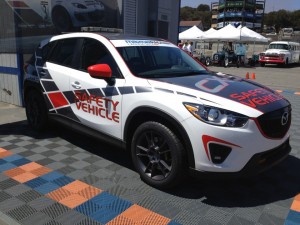 The first production Mazda to feature our new KODO design theme and full suite of SKYACTIV® TECHNOLOGY, this 2013 Mazda CX-5 made its debut this weekend at the Rolex Monterey Motorsports Reunion. Fitting, since the 2013 CX-5 is an IIHS Top Safety Pick and Euro NCAP five-star safety winner! 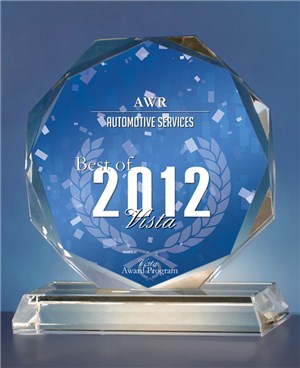 VISTA August 22, 2012 — AWR has been selected for the 2012 Best of Vista Award in the Automotive Services category by the Vista Award Program.

The Vista Award Program is an annual awards program honoring the achievements and accomplishments of local businesses throughout the Vista area. Recognition is given to those companies that have shown the ability to use their best practices and implemented programs to generate competitive advantages and long-term value.

HIROSHIMA, Japan—Mazda Motor Corporation held a ceremony to commemorate the start of production of the new Mazda6 (known as Atenza in Japan), fully redesigned for the first time in five years. The ceremony took place at the company’s Hofu Plant No. 2, in Yamaguchi prefecture. Approximately 500 people gathered for the celebration, including Mazda’s Representative Director and Chairman of the Board, President and CEO, Takashi Yamanouchi, executives, employees and a representative of the Mazda Workers Union. The first vehicle to come off the line was a Mazda6 wagon built to European specifications and powered by the SKYACTIV-G 2.0 gasoline engine.

In his speech, Takashi Yamanouchi commented “I am deeply moved that production of the third generation Mazda6, the flagship model of our new-generation vehicles, starts in such an important year for us. It is the 30 year anniversary of the start of operations here in the Nishinoura district of the Hofu Plant and the 10th anniversary of the start of production of the first-generation Mazda6, back in 2002. That first Mazda6 debuted as an embodiment of Mazda’s brand message, Zoom-Zoom, and its success led to great improvement in our brand image. The new Mazda6 that starts rolling off the line today features both SKYACTIV TECHNOLOGY and KODO – Soul of Motion design. Its development represents the very best of our engineering capability and our uncompromising attention to detail. Let’s all work together to promote the new Mazda6, to make it a model that gains the support of customers all over the world and leads the Mazda brand to new level.”

Representing all Hofu Plant employees, Masatsugu Ohgi from the Trim & Final Assembly Gr. No. 2 in the Vehicle Production Dept. No. 4 said “Incorporating everything we have learned about quality improvement through the production of nine million vehicles over 30 years at Hofu, we are determined to deliver a new generation Mazda6 that will outperform the previous model in every respect and stir the emotions of customers around the world.”

The all-new Mazda6 is the first model to be equipped with Mazda’s unique brake energy regeneration system, i-ELOOP. In all areas the development team tried to instill the essence of the Mazda brand, the joy of nimble handling that responds precisely to the driver’s intentions, while offering the class, style, quality and comfort people expect from a car in the CD segment.

The new Mazda6 will be introduced to Europe and Japan before the end of 2012, followed by other markets starting with the US at the beginning of 2013. Mazda is planning to produce approximately 120,000 units of the Mazda6 per year at the Hofu Plant.

Mazda will premiere the new Mazda6 sedan with Russian specifications at the Moscow International Automobile Salon 2012, which opens on August 29, 2012.

HIROSHIMA, Japan—Mazda Motor Corporation will hold the world premiere of the all-new Mazda6 sedan (known as Mazda Atenza in Japan), totally redesigned for the first time in five years, at the 2012 Moscow Motor Show. The Moscow Motor Show begins August 29 and runs through to September 9, 2012.

The new Mazda6 is the second of Mazda’s new generation of products which incorporate both the full range of SKYACTIV technologies and the new KODO-SOUL OF MOTION design language. It will also be the first model equipped with Mazda’s brake energy regeneration system, i-ELOOP. The introduction of i-ELOOP marks stage 2 of Mazda’s Building Block Strategy for environmental technology development. The strategy calls for thorough improvements in base automotive technologies before the step-by-step introduction of electric devices to improve fuel economy and reduce carbon emissions.

The new Mazda6 draws on the best of Mazda’s technical expertise and craftsmanship across all domains, from dynamic performance and design, through to environmental performance and safety. It stands as the flagship model for a new generation of Mazda products. It features a sense of dignity, style, luxury feel and comfort expected from a vehicle in the CD segment whilst offering the pleasure of responsive and agile driving, which is at the core of the Mazda brand.

The model to be exhibited at the Moscow Motor Show is a Russian specification sedan equipped with a direct-injection SKYACTIV-G 2.0 gasoline engine and six-speed SKYACTIV–DRIVE automatic transmission.

The official name of the motor show is Moscow International Automobile Salon 2012. Press days will be August 29 and 30 and it will be opened to public from August 31 to September 9. Mazda will hold its press conference on August 29, 2012. 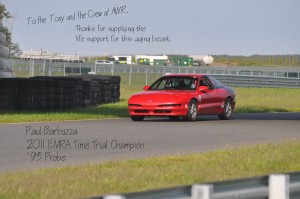 Evening Tony…
Glad to announce that I was able to take the Probe to a season Time Trial championship.  All your early season advise and AWR performance proved invaluable and led to three event victories in route to the championship.
Paul

NEW YORK, NY, September 9, 2011 — AWR has been selected for the 2011 Best of Vista Award in the Automotive Services category by the U.S. Commerce Association (USCA).

The USCA “Best of Local Business” Award Program recognizes outstanding local businesses throughout the country. Each year, the USCA identifies companies that they believe have achieved exceptional marketing success in their local community and business category. These are local companies that enhance the positive image of small business through service to their customers and community.