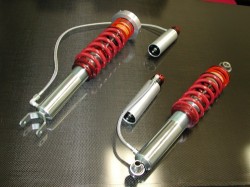 We never want to wreck a car, however, this race turned out to provide us with good information.

The MX-5 rolled 4 times. Certainly a lot of punishment for any car or cage. All outer body panels and some suspension pieces were thoroughly destroyed.

The passenger compartment was in incredible shape though. The roll cage didn’t even show any signs of deformation.

The driver only suffered a broken thumb and that was due to it being pinned between the vehicle and the ground.

Following, is the story of the weekend as told by driver John Kanavas.

Laguna Niguel, CA (12.08.05): The Mazdaspeed Motorsports team faced every facet of true endurance racing at this year’s 25 Hours of Thunderhill.

The Mazdaspeed Motorsports Teams’ effort started out well with both cars sitting in the 1st and 2nd starting position for the E1 class. Charles Espenlaub set the fast time for the #19 car, which sat on pole, while Jim Daniels set the pace for #55, sitting on outside pole. Ken Dobson would start the 19 car with Jeremy Barnes starting the 55. Charles Espenlaub, Johnny Kanavas and Mark Gillies (of Automobile Magazine) were also driving car 19 and Tim Buck, Jim Daniels, Scott Kaluza, and Andy Bornhop (of Road & Track Magazine) were the additional drivers for car 55.

Dobson was off like a bullet and ran strong in his first stint. Passed by some of the other quicker E1 cars, Ken sat a solid third as he brought the car in for Mark Gillies to take over. Gililes held up a good pace, while battling an evil handling car. Around the 4-hour mark, Gillies brought the car in for Johnny Kanavas to take over. The 19 car now sat in 2nd place, while the 55 car was 3rd. Kanavas was also fighting an ill-handling car that began to have a very long brake pedal. “The car was all over the place and the brake pedal would go way down, almost to the floor, it was evil to drive.” reported Kanavas. Exiting Turn-10, a Cobra and one of the factory Honda SI’s came together in Turn-10, right in front of Johnny in the 19 car. Kanavas backed off and slid between the two cars and debris, making it out clean. Despite the car being a handful and the track becoming greasy, Johnny managed to bring the car up to 1st place in class and 7th overall. At about the 6 hour 15 minutes mark, the 55 car came in with a smoking differential. “I first saw the smoke in my mirrors as the lights of the cars behind me lit it up. Then it began to fill the car.” reported Daniels. The team quickly assessed the damage (right axle seal) and replaced the diff. The stop, with fuel, took about 40 minutes. Espenlaub was now on deck for the 19 car. Charles drove a consistent stint, keeping the car in 1st place, handing the car back over to Dobson. Ken ran a double-stint in what he described as “rain-like” conditions. It was about the 7.5 hour mark and Gillies was now back in the car.

During Gillies’ stint in the car, he radioed in to report that the 19 car was stuck in 3rd gear. The car was immediately brought in and the crew went to work. With only on spare transmission, the team quickly attacked the car, replacing the gearbox. Within 15 minutes from the time the 19 car came in, the 55 car reported the same problem with the gearbox. The crew managed to get the 55 car stuck into 5th gear, which allowed the 55 team to continue on, they were now in the 40th position overall. Kanavas prepared to enter the 19 car once the work was completed. The crew gave Johnny 3 new Hankook tires for what would be a double-stint and the car fell back to 27th overall due to the long pit stop. Kanavas settled into a consistent pace and worked his way through traffic. As the first half of the stint ended and Johnny was brought in for fuel, Crew Chief, Rick Weldon asked Kanavas to run the car in 4th gear only in order to conserve the gearbox. “The car felt much better with the new tires. We were able to lay down some good lap times even in conservation mode. These new MX-5’s make tons of torque!” said Kanavas. There would be two caution periods during Johnny’s stint. One was due to the #25 Porsche of Johannes Van Overbeek sitting on its’ roof outside of Turn-13. The second caution was brought out for some stalled cars that were stuck on course. Kanavas eventually finished up his double-stint and brought the car in for brake change and fuel and handed the reins over to Espenlaub. Meanwhile, Jim Daniels’ prepared to hand the 55 car over to Scott Kaluza, which was now stuck in 6th gear. The 55 team just kept plugging away and were now up to 36th place overall.

Nearing the 20-hour mark, Kanavas took over from Gillies, received a new right rear tire, and was now on his way. At about 7:15am, the entire race would change for the #19 Mazdaspeed Motorsports team… While cresting the hill at Turn-5a, Kanavas pulled to the outside (left) of the #14 Factory-Five Cobra. Running side by side into Turn-6, the Cobra made a surprise turn to the left, directly in front of the 19 car. The two cars made immediate contact throwing both cars into the air. The 19 car rolled four times, while the Cobra went over three times. The impacts were hard and both cars were destroyed. Unfortunately for Kanavas, his left hand was pinned under the roll bar as the car stopped rolling. “I was stuck in the car and couldn’t move. All I could see was some of our photographers nearby and waved to them frantically for help. Thankfully, they came over and rocked the car off my hand.” reported Kanavas. The rescue crew eventually arrived and removed Johnny from the car. Kanavas immediately went to the ground as he was short of breath and very sore. The two drivers met in the ambulance and were both a bit shaken. The Cobra was making a left turn for an access road on the left side of the track as he was out of fuel and never saw the Mazda beside him. Kanavas continues, “I was very surprised to see the Cobra turn left. The initial impact was hard and I didn’t realize I was airborne until the first landing. The next few landings were faster and hard. It was not fun.” Both drivers were taken to the medical center at the track. Spencer Sharp, driver of the Cobra was released, while Kanavas was sent to hospital for x-rays. Johnny suffered only a broken thumb and sore neck. The 19 car ended up 36th overall and 8th in class.

For aftermath photos of the crash, visit: MX-5 photos For Photos of the MX-5 after it’s return see gallery two.

For action captured live from the event, check out the KK blog at: http://jkana.blogspot.com/

“With the all-new 2006 Mazda MX-5 as a starting point, it was easy for us to create the fastest, best handling and most comprehensively prepared Spec Miata yet,” said Steve Sanders, Manager, MAZDASPEED Motorsports Development. “The combination of a tuned suspension, a willing engine and consistent braking means Miatas have always made terrific racecars. With more grip, more power and more stopping ability, the new MX-5 is the perfect starting point to be the very best Miata racecar yet.” END_OF_DOCUMENT_TOKEN_TO_BE_REPLACED