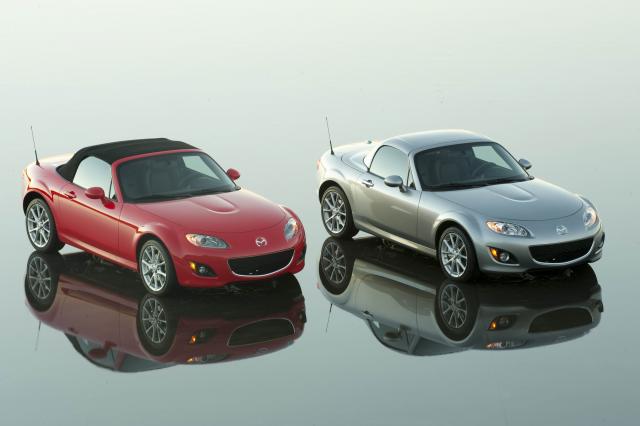 IRVINE, Calif. (February 3, 2011) – The world’s best-selling two-seat roadster, the iconic Mazda MX-5 Miata, continues to set the bar even higher for the competition today, reaching a new milestone of 900,000 units produced. Nearly 45 percent – more than 388,000 units – of those were sold in the United States since the car launched in 1989.

The MX-5 made its global debut at the 1989 Chicago Auto Show and has since received several facelifts, seen many limited and special edition versions, been named “Car of the Year” multiple times around the world and topped countless “Best Sports Car” lists. But its soul has always remained that of a pure sports car, dynamically engineered and tuned to produce driver happiness, whether on a short trip from point A to point B or on extensive S-curve searches. The Zoom-Zoom driving experience evoked by the MX-5 is not lost on consumers, and has always been within their reach with the roadster’s affordable pricing.

“As we head toward the next production milestone of one million units, Mazda is committed to further evolving the MX-5,” said Seita Kanai, Mazda Motor Corporation (MC) senior managing executive officer, research and development. “We will refine its fun-to-drive character as well as further enhance its environmental and safety capabilities. In the years ahead, we will continue to cherish the MX-5 alongside its loyal fan base as the symbol of the Mazda brand.”

The first-generation MX-5 Miata (1990-1997 model years) was equipped with a 1.6-liter, inline four-cylinder engine that produced 116 horsepower and 100 lb-ft of torque. A removable hardtop was optional and initial color choices were red, white and blue. The starting price was $14,000, and early production of the affordable, grin-inducing roadster could not meet the enthusiastic demand of consumers. A redesigned second-generation model was unveiled at the Tokyo Motor Show in 1997 (model years 1999-2005 – there was no 1998 model-year car) and the third generation model was introduced at the Geneva International Motor Show in 2005 (model years 2006-present).

“Since Mazda launched the original MX-5, it has undergone two complete product redesigns and a series of upgrades,” said Nobuhiro Yamamoto, MC program manager, MX-5. “Its enduring success is due to the strong support it enjoys from fans around the world, and I will strive to keep the MX-5’s spirit alive while evolving it into a car that will be loved by even more people.”

Mazda North American Operations is headquartered in Irvine, Calif. and oversees the sales, marketing, parts and customer service support of Mazda vehicles in the United States, Canada and Mexico through nearly 900 dealers. Operations in Canada are managed by Mazda Canada, Inc., located in Ontario; and in Mexico by Mazda Motor de Mexico in Mexico City.

For more information on Mazda vehicles, visit the online Mazda media center at www.mazdausamedia.com. Product B-roll may be ordered online by visiting The News Market at www.thenewsmarket.com/mazda.